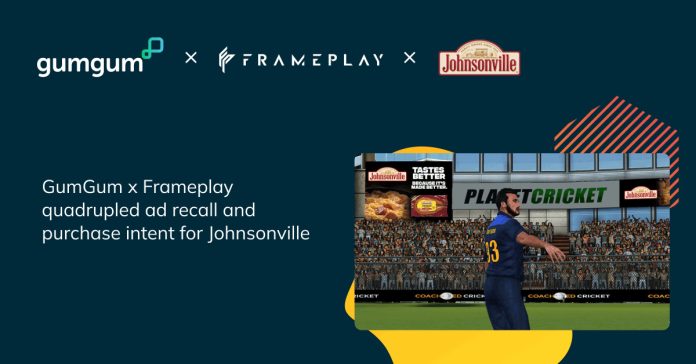 Johnsonville, the most popular sausage brand in the United States, is committed to continuous development on its advertising strategies and was eager to enter the critical in-game advertising industry. With GumGum and Frameplay, Johnsonville targeted gamers playing in sports, casual and simulation games on mobile devices with simple, standout creative ads that did not disrupt gameplay and enhanced the gaming experience.

Johnsonville’s first intrinsic in-game campaign outperformed industry standards and saw incredible success in mobile ad recall with 56% of gamers remembering the ads and a lift of almost 14 points in purchase intent. Both results are quadruple the industry average. Additional results showed success such as “fit as a game sponsor” (23 point lift), “brand sponsorship of a game” (40 point lift) and “Johnsonville is a family-owned company” (22 point lift).

“Intrinsic in-game advertising offered us the opportunity to reach millions of gamers and we’re thrilled at the results of our initial four-week campaign with GumGum and Frameplay. We truly believe that the future of digital advertising will be immersive and contextually relevant. Intrinsic in-game advertising achieves both, and it’s clear that this advertising strategy is one that is teetering on the verge of a mass industry adoption,” said  Stephanie Plehn, Marketing Communications Manager at Johnsonville.

Comscore conducted a brand lift study on behalf of GumGum and Frameplay to measure overall campaign performance for Johnsonville. The results of the campaign reinforce the power of intrinsic in-game ads for brand recall, awareness and purchase intent. Gamers positively react and show high levels of attention to intrinsic in-game ads that blend seamlessly into the gaming environment and don’t disrupt gameplay.

Additional results from Johnsonville’s campaign include:

“Digital environments are evolving at lightning speeds and advertisers must be willing to lean into meeting consumers where they are – brands that continue to wait to include intrinsic in-game advertising as part of their core marketing strategies will fall behind,” said GumGum CEO Phil Schraeder. “Contextually relevant, intrinsic in-game ads with simple and effective creative always results in increased attention. My question for brands and advertisers is, what are you waiting for?”

“Intrinsic in-game advertising is the future of digital advertising. Over 3 billion people play games every single day, and as digital environments become more immersive, advertisers will have to adapt to newer ad strategies and formats,” stated Frameplay CEO Jonathon Troughton. “Time and again, intrinsic in-game advertising has proven to be extremely effective and the results of our first campaign with Johnsonville prove its power yet again.”