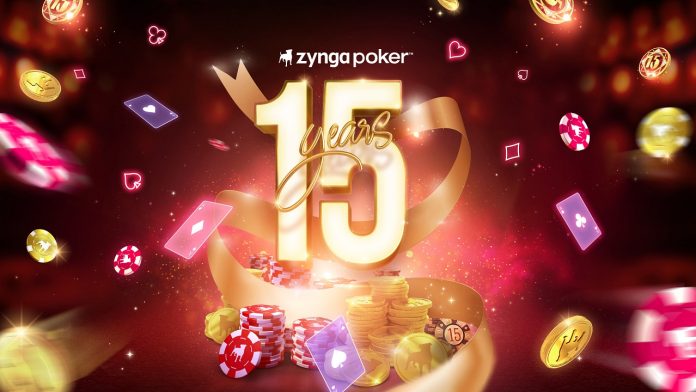 Zynga Inc., a wholly-owned publishing label of Take-Two Interactive and a global leader in interactive entertainment, announced that Zynga Poker, the world’s largest free-to-play mobile poker game, is celebrating its 15th Birthday with an action-packed 21-day event in-game. Kicking off today and running through September 28, players are invited to join the festivities as Zynga Poker dishes out daily surprises and massive rewards for those joining the virtual tables.

Since launching in 2007, Zynga Poker has amassed a global community of poker fans of over 236 million lifetime players, who are drawn to the intuitive yet action-packed gameplay of Texas Hold’Em. Players of all levels can join the 15th Birthday celebration as the mobile game will be shelling out impressive rewards daily, ranging from free chips to Lucky Bonus Spins and unique table gifts. Players will have the chance to try their hand on the new birthday-themed tables and collect limited watches as they win their way through new challenges. To cap off the festivities, Zynga Poker will be giving away 15 billion chips to 15 lucky winners on their social media channels, making it the largest giveaway in the game’s history.

“Zynga Poker brings players an authentic casino experience and we’re thrilled to celebrate 15 years with our community,” said Yaron Leyvand, Executive Vice President of Mobile Games at Zynga. “As one of the largest mobile poker games, Zynga Poker brings together millions of players from around the world to connect over a mutual love of the game, and we look forward to seeing everyone at the tables to celebrate this monumental birthday.”

Zynga Poker is one of the most popular poker games in the world and now has more ways for players to compete than ever before. Designed to play like a real table experience, the Texas Hold ‘Em Poker game lets players participate in Spin and Win tournament mode, or a cash table game to win big with up to nine players. For over 14 years, Zynga Poker has developed a strong community supported by a VIP program, which allows players to earn benefits and features by reaching higher tiers with exclusive chip package offerings and special game modes.

Mobile Gaming Market to Hit $165.54 Billion by 2026. M&A and Partnerships to Drive Innovation in Technology and Gaming Experience in the Market