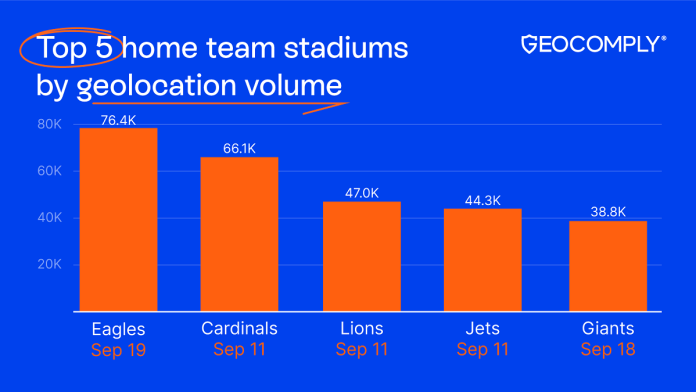 A GeoComply analysis of geolocation volumes in and around NFL stadiums shows that live events are natural meeting points for American sports fans who want to wager.

Over 66,000 geolocation checks were made from over 7,300 accounts at State Farm Stadium during the Arizona Cardinals home game against the Kansas City Chiefs on September 11.

The stadium, which will host Super Bowl LVII in February, is near the top of GeoComply’s analysis of transaction volumes coming from NFL stadiums. It will likely prove a betting bonanza as Arizona becomes the first regulated sports betting state to host the Super Bowl since PASPA was overturned in 2018.

GeoComply’s Chief Executive Officer Anna Sainsbury commented: “Seeing data from many of these games that shows more than 10 percent of NFL fans in stadiums are engaging with licensed sportsbooks is a clear win for states that choose to regulate sports betting. This wealth of data is so important for lawmakers and sports leagues to determine sports betting policies in their states and at their stadiums.”

The Philadelphia Eagles’ Lincoln Financial Field was the busiest stadium during weeks one and two. Remarkably, even with only one other active NFL game to wager on, volumes skyrocketed to 76,400 – more than any stadium in the first two weeks of the season.

Even though Steeler nation didn’t keep pace with Eagles fans, their nearly 40,000 transactions in and around Acrisure Stadium on Sunday amounted to 28 percent of all activity for the city of Pittsburgh during the recorded time period.

Based on the data, bettors at the Ravens v. Jets game were more active at MetLife Stadium in week one than those at the same stadium for the Panthers v. Giants game in week two. Both teams played on a Sunday.

Over 44,300 geolocation checks were recorded in week one by 8,800 fans at the Jets game, but when the Giants returned to the Metlife Stadium this past weekend 38,800 checks were logged by 800 fewer fans (unique accounts).

Methodology: GeoComply captured geolocation data for the Stadium Home Opener Analysis from inside the stadiums and the surrounding parking lots to include tailgating. The data was collected from three hours before the kick-off of each game until four hours after kick-off (a total of seven hours). GeoComply has a unique view of the US online sports betting market as the trusted geolocation supplier for almost 100 percent of the country’s operators. Therefore its statistics provide a reliable overview and insight into the state of the industry.