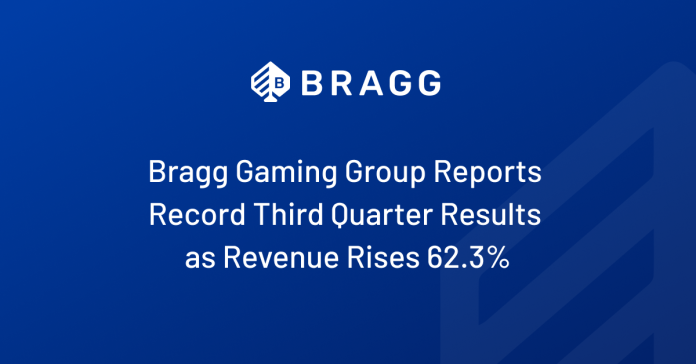 “Our record third quarter results reflect significant year-over-year revenue, gross profit and Adjusted EBITDA growth highlighting our progress in providing value-added content and services to a growing global base of customers across regulated iGaming markets, including in North America,” said Yaniv Sherman, Chief Executive Officer for Bragg. “In the third quarter of 2022, we generated third quarter records for revenue of

“We continue to make steady progress on our strategic initiatives, including the development of new proprietary content, securing exclusive distribution agreements for popular third-party content and expanding our customer base and the number of markets we serve, including the Dutch market where we have established a leading position following our launch with multiple operators since the market opened. We have also integrated the Wild Streak Gaming and Spin Games acquisitions, established two new in-house game studios, and adjusted other areas throughout the organization to further streamline our operations and better position Bragg to scale as a global business.

“As a content-led business, we are focused on accelerating the number of proprietary games we develop and growing the number of exclusive third-party games from leading studios, such as Sega Sammy Creation, Bluberi and Bally’s Interactive’s Gaming Arts and King Show Games studios, we can offer our customers. Our library of proprietary and exclusive third-party games has grown consistently throughout 2022 and that growth will accelerate in 2023 and beyond. We also continue to further differentiate our content library through new exclusive iGaming content distribution agreements with leading third-party game development studios. Our expanding library of proprietary and exclusive third-party content will serve us well as we deploy these new games over our newer tech stack with customers in markets we already serve, as well as when we enter new markets, particularly in North America.”

Mr. Sherman concluded, “Our positive Adjusted EBITDA, combined with capital we raised in the third quarter positions us to continue to invest to drive further growth. Reflecting our strong performance through the first nine months of the year and our expectations for consistent operating execution in the fourth quarter, we are reiterating our guidance for 2022 full year revenue and Adjusted EBITDA. Looking ahead, we expect our consistent execution against our strategy and growth initiatives will drive further revenue and Adjusted EBITDA growth in 2023. Our expectation that we will continue to deliver top-line and Adjusted EBITDA growth in what is currently a highly dynamic and volatile environment is a testament to our team members ability to execute on our focused strategies, which positions us well to deliver near- and long-term shareholder value.”