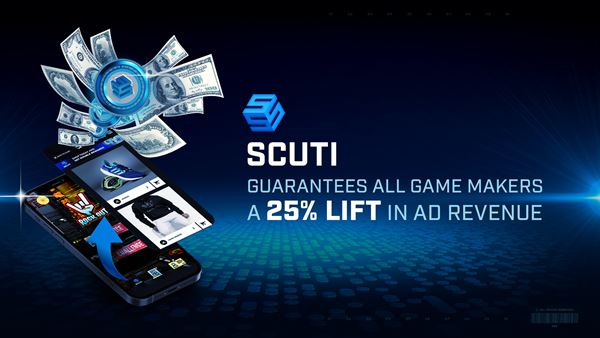 Scuti CEO and founder, Nicholas Longano hosted a keynote at the virtual Hyper Games Conference last week. His keynote focused on new opportunities open to game makers through the advent of gCommerce and rewarded gamified interstitials, with a guarantee to increase every game maker’s ad revenue by 25%, while improving the player experience.

Longano challenged the notion that hyper games had to use outdated business models to monetize their games. “Most of these games force attrition due to the outdated and alienating ad practices they allowed into their games. No game, whatsover, should ever allow any ad which ejects their players from their game experience.”

He embraced the new rules set forth by Apple and Google. He demonstated how Rewarded Gamified Interstitials (RoGIs) could pave the way to increased revenues while providing players with anticipation and rewards between level loads…going as far as to refer to Scuti’s new ad system as the “Superbowl of game advertising…and something which players look forward to at each level of their game.”

Tony Shiff, CEO of 20 Below Games, has had Scuti’s marketplace in his games for almost a year, and said, “Everyone knows that most ads in game are intrusive and annoying. Many players don’t want to pay for the game, so they put up with them. Having a solution that is literally “opt-in” for the player, yet monetizes as good or better than traditional game ads, is fantastic. As a games developer we are thrilled to have a win-win solution for both us and the players. We’ve even seen players come up with innovative games techniques to maximize their Scuti rewards – so in effect, a new form of gameplay!  Scuti is a powerful revenue generator that keeps players engaged and retained in the game – that’s amazing.”

Longano also showcased Scuti’s gCommerce platform, which is paving the way for game makers to earn accretive new revenues – tapping into the $4.9 Trillion gCommerce market and allowing players to earn Scuti$ rewards for each purchase, and in turn, use those rewards to make in-game purchases. After 12 months in market, almost 20% of Daily Active Users returned to Scuti-enabled  games to collect their rewards every day.

Longano demonstrated how game makers can earn an accretive $14 ARPPU per player per month. He pointed out that Scuti was generating the highest eCPMs in the video game industry, allowing players access to curated deals, offers and rewards to fuel their gameplay, without ever leaving the lobby of their games.

Longano ended his keynote with a guarantee to every game maker and the Scuti commitment: “We are so sure that implementing Scuti  will increase your ad revenue by 25% that we guarantee it.  We will work with you to optimize the life-time value of your game and never remove your players from their game or interrupt their experience.  That’s our promise to you.”