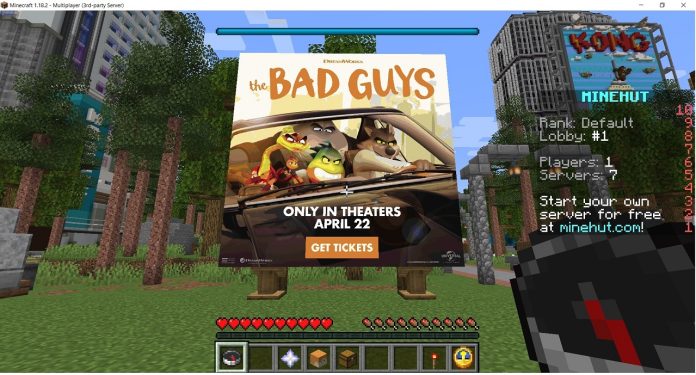 Universal Pictures, which releases all DreamWorks Animation films, has pioneered a new way to create connections with young audiences. With this new campaign, The Bad Guys characters come to life in front of a player’s eyes every time a player passes by. As they encounter pre-programmed dialogue boxes that trigger exciting and fun conversation, gamers can get to know and start bonding with the film’s colorful characters prior to the film’s April 22 release. In just the first four days of the program, the collection of ad units, including The Bad Guys billboards, animated GIFs, and 3D ads, generated more than 10 million impressions of at least 10 seconds in duration, and were seen by more than 2.2 million unique players. More significantly, players self-selected to interact with the 3D characters for more than 42 days of total chat time, yielding a 62% engagement rate. This rate is substantially greater than the average Tik Tok engagement rates of 1.5-16% (source: Funnel.io), which is highest among social media platforms. In addition, the campaign featured the prompt “We are going to pull off the ultimate heist and go from bad to good! See us in movie theaters April 22! Will you watch?” 79% of users responded ‘Yes.’ Bottom line: The Bad Guys and Super League’s 3D ads are good in game!

Super League’s full suite of ad formats come fully equipped with robust performance analytics, now optimized for 3D units, offering critical measurement around key metrics, including engagement rate, response rate, chat time, exposure time, reach, and complete audience demographics. This is the first of many campaigns that will allow players inside Roblox to interact and converse with brands like never before.

“At DreamWorks Animation and Universal Pictures, we are committed to innovation and creating unforgettable characters that thrill, amuse and entertain audiences of all ages, so we are delighted to help introduce DreamWorks’ incredible Bad Guys to the world through Super League Gaming and the gaming metaverse,” said Nicole Schlegel, Vice President of Global Digital Marketing for Universal Pictures. “We have zero doubt that gamers will have a blast as they meet and interact with these characters and that it will enrich their experience with The Bad Guys when the film arrives in theaters on April 22.”

“The ability to bring these characters to life at scale takes in-game experience to a whole new level,” said Mike Wann, Chief Strategy Officer for Super League. “These products are able to create authentic, exciting interactions with new personalities, and delight players with engaging new activities in the gaming metaverse. This new format not only brings deep insights for brands, but also incremental monetization for game developers – all while increasing in-game dwell time.”