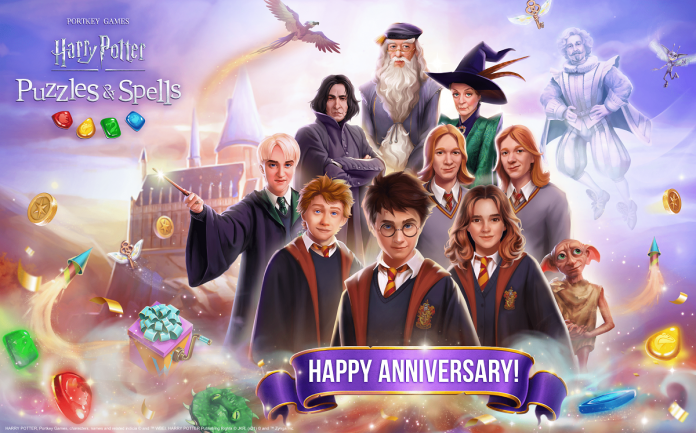 Zynga Inc., a global leader in interactive entertainment, announced that its magical Match-3 mobile game, Harry Potter: Puzzles & Spells, is marking its one-year anniversary with a full week of festivities. Fans around the world are invited to join the celebration with a seven-day slate of in-game gifts, events, sweepstakes and new content commemorating the occasion.

Since its launch in September 2020, Harry Potter: Puzzles & Spells has delighted fans with its authentic wizarding world puzzles and gameplay. With more than 2,000 puzzle levels in the main player journey, the game continues to invite players together to revel in the fun and excitement of Hogwarts with new content and events. Spotlighting players’ journies in the game at this first anniversary, Zynga has released a new trailer featuring game highlights.

“We’re incredibly proud of the accolades and reception that Harry Potter: Puzzles & Spells has received, but we’re even more inspired and humbled by the players who have joined us on this journey,” said Yaron Leyvand, Executive Vice President, Games at Zynga. “We’re thrilled to celebrate this milestone with the fans, and look forward to opening the game’s next chapter, together.”

Inspired by Dudley Dursley’s most memorable birthday, beginning this week, a new ‘London Zoo’ themed event in the game will invite players to collect ‘presents’ on their gameboard to earn reward chests. Bringing a serpentine twist to this birthday-inspired event, players can make matches next to mysterious boxes on their gameboard to release the python inside. Starting September 23rd, players can join in a treasured Hogwarts tradition with the in-game House Pride Event, completing puzzles to earn points for their house with results tracked in a global leaderboard. From September 22nd through September 24th, players who log in to the game will be treated to a daily in-game anniversary gift to further celebrate the occasion.

Throughout the anniversary week, visitors to the Harry Potter: Puzzles & Spells Twitter, Facebook and Instagram channels will be invited to post their favourite memory from the game tagged #PuzzlesAndSpellsAnniversary. Three players will be chosen at random to win an anniversary prize package, packed with in-game currency, items, power-up bundles and more.

In Harry Potter: Puzzles & Spells, players enter a Match-3 adventure brimming with the spells, humour, colour and characters of the Harry Potter series. Featuring the soundtrack and voiceover recordings from the original Harry Potter films, fans follow an authentic, mobile retelling of Harry’s journey through the wizarding world. Earning spells and special boosts as they advance, players solve Match-3 puzzles populated with hopping Chocolate Frogs, fluttering Winged Keys, battling wizard chess pieces and other unexpected obstacles and objects. In the spirit of camaraderie and friendly competition at Hogwarts, players can join or form clubs with other fans to socialise, collaborate on puzzle strategies, share lives and vie for prizes in exclusive Club Events.

Mobile Gaming Market to Hit $165.54 Billion by 2026. M&A and Partnerships to Drive Innovation in Technology and Gaming Experience in the Market