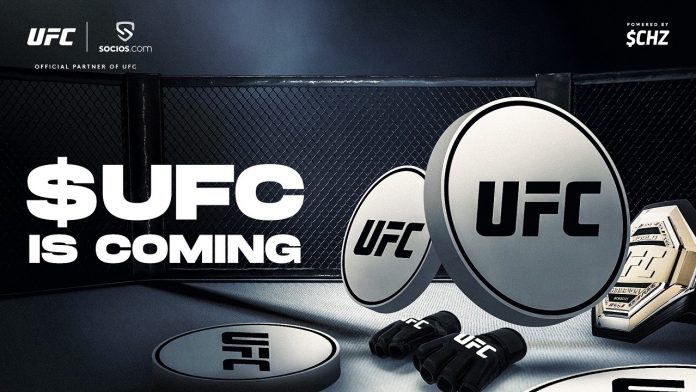 The $UFC Fan Token is scheduled for launch on Socios.com in June and will have a maximum lifetime supply of 20 million.

Chiliz has major global expansion plans for 2021 and will increase their existing presence in Europe, while targeting many more Fan Token launches in the U.S, U.K., Asia and South America. Chiliz has multiple office locations around the world and will open new European, U.S. and South American headquarters in Madrid, New York and Sao Paulo in 2021.
“We are continually looking for ways to increase engagement with our fans,” said Tracey Bleczinski, Senior Vice President, UFC Global Consumer Products. “UFC has more than 625 million fans around the world, and Fan Tokens are a unique way to connect with them through a compelling, authentic product that brings them closer to UFC and gives them influence, while also rewarding their passion for the sport.”

“Socios.com and Fan Tokens will empower UFC to connect with its global following like never before,” said Alexandre Dreyfus, CEO of Chiliz and Socios.com. “By giving fans around the world the ability to influence their favorite teams and sports, we are transforming what it means to be a fan. We’re delighted to welcome UFC to our growing roster of Fan Token partners and we are very excited to continue our expansion in the U.S. and globally, throughout 2021.”

UFC and DraftKings Extend Strategic Relationship to Include Gamified NFTs

Stake.com expand tie up with UFC with Presenting Partner sponsorship for UFC 274