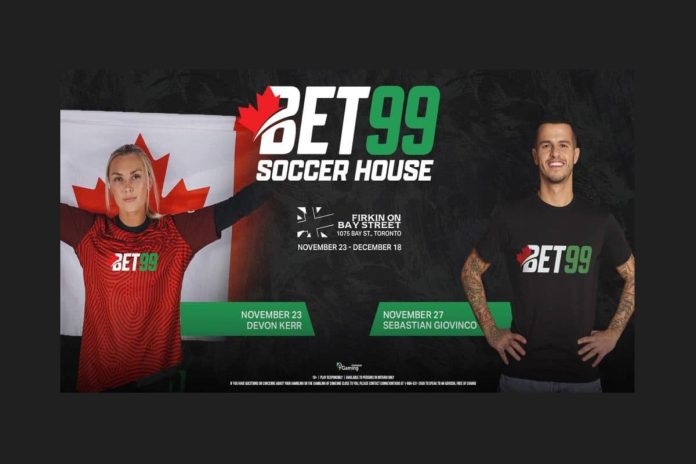 BET99 and Giovinco will launch the partnership on Instagram with a number of celebratory fan giveaways, including signed soccer balls and merchandise. Giovinco will also host an Instagram Live appearance with BET99 and provide picks and predictions for upcoming World Cup games.

Giovinco will join the BET99 SOCCER HOUSE watch party on November 27, 2022 at local Toronto sports pub, The Firkin on Bay Street, where Giovinco will lead supporters of Team Canada in cheering on the team’s second World Cup match. Giovinco will also post pre-game and halftime hits, led by OneSoccer writer and sportscaster James Sharman, and which will be shared on all BET99 channels, including BET99TV.

“We’re thrilled to have drafted Sebastian to the BET99 team. His stature and record in the Canadian and international soccer community is unparalleled, and the insights and excitement that he’ll bring to Team Canada, our players and our platform is a game-changer,” Jared Beber, CEO of BET99, said.

“Partnering with BET99 is a great opportunity and this is perfect timing. As the World Cup heats up and Canada makes a run for the first time in 36 years, I’m really excited to join a truly Canadian online sports betting company in rooting for the team. And joining this top-notch roster of BET99 ambassadors is an incredible honour,” Giovinco said.

Under the new agreement, Giovinco will allow BET99 to use his name, image and likeness for marketing and advertising purposes both during and after the FIFA World Cup. Giovinco, a legend in the Canadian and Toronto sports communities, will develop an active partnership with BET99, providing insight into the Canadian and international soccer scene, as well as sharing his love for his newly-adopted country and city and his future in the soccer community.

PIXBET at the World Cup: Bookmaker signs partnership with Grupo Globo for the Qatar World Cup