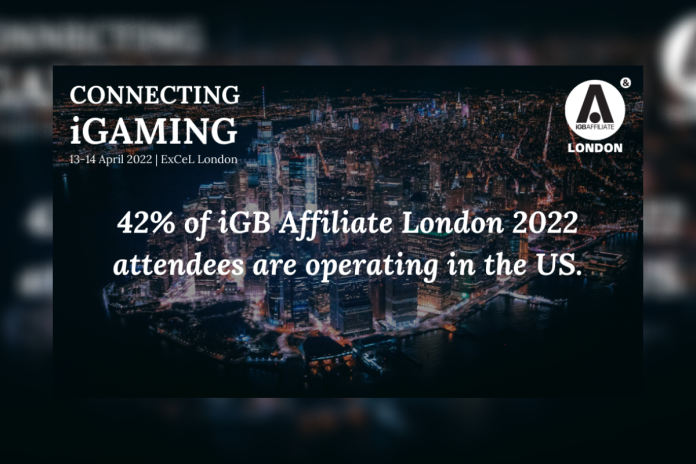 42% of registrants operating in the United States

The 2022 edition of iGB Affiliate London (13-14 April, ExCeL London) will have a pronounced North American accent. The latest show data reveals 42% of industry professionals who have registered are operating in the US. The figure is part of the latest dataset released by event organisers Clarion Gaming. This also highlights the seniority of delegates, with close to eight in ten (78.9%) categorised as final decision makers.

Commenting on the data, Naomi Barton, portfolio director responsible for iGB Affiliate said: “We are still 10 weeks from going live and I’m delighted that the figures are looking strong, and positive for both our exhibitor and visitor communities. Lead events such as iGB Affiliate London serve to reflect the dynamics of the industry sectors that they serve and the uptick in US pre-reg figures is a manifestation of the market dynamics impacting the affiliate sector in North America. Figures from iGB’s principal data partner H2 Gambling Capital forecast 200% growth in the total addressable revenues for affiliates in North America over the next five years, compared to the global figure of 68%. Add the new states either launched or launching such as NY which had $1bn staked in 16 days and you get the picture of an extremely buoyant market.”

She added: “We are tracking comfortably ahead of the pre-reg figures for 2020 which represents positive news for the 160+ exhibitors already confirmed for iGB Affiliate London, who will be occupying 6,265 sqm of net floor space across three halls at ExCeL London. The Affiliate market is upbeat about the year ahead and I’m looking forward to a repeat of the positivity that we all experienced at iGB Affiliate Amsterdam and iGB Live! staged five months ago.”