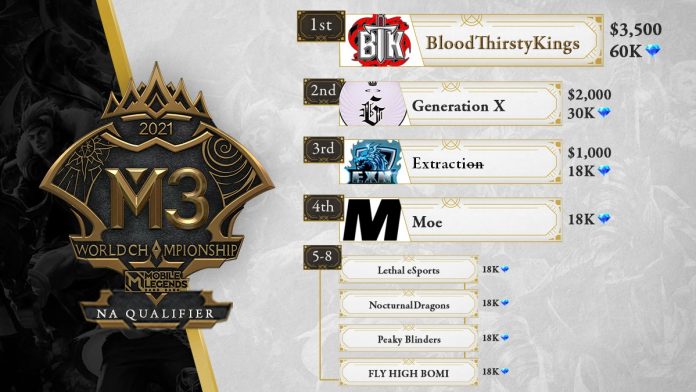 Over 19,650 viewers tuned in as BloodThirstyKings took the North America throne and claimed a spot in the M3 World Championship

The passion of the Mobile Legends: Bang Bang community is unparalleled, and we are thrilled to have the BloodThirstyKings represent North America on the global stage at M3 this year,” said Nicholas Chang, North​​America, Esports Manager at MOONTON Games. “The qualifier was a huge success, and we look forward to providing more competitive opportunities for the region in the future.”

The grand final played host to a thrilling matchup as BTK won 3-1 against Generation X (GX). GX started the finals strong by securing a win in round one but quickly gave up their lead to BTX in round two. BTX went on to win again in round three and claimed their NA Championship title in the fourth round. GX took the second place and USD $2,000 followed by Extraction (EXN), who took third and USD $1,000.

The two-day action-packed stream peaked at over 19,650 viewers as host Jake “SirActionSlacks” Kanner kept viewers entertained alongside with casters Austin “Capitalist” Walsh and David “Assassin Dave” Mao. Over 2.7 million diamonds were also given out to winners, participating teams, and viewers throughout the weekend.