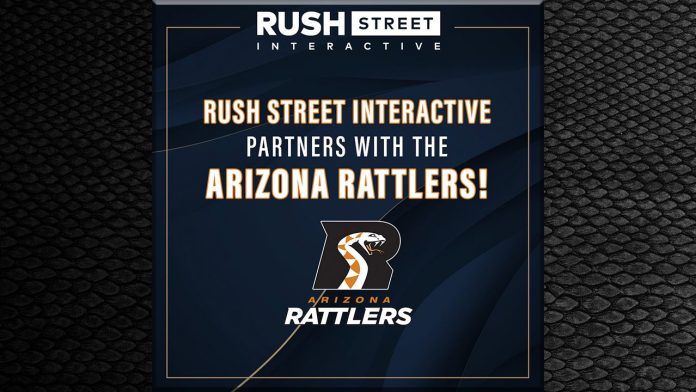 Rush Street Interactive, Inc., a leading online casino and sports betting company in the United States, announced that the Arizona Rattlers (the “Rattlers”), a long-established professional indoor football franchise, designated RSI as their operating partner for online sports betting. In addition to receiving market access in Arizona, RSI will become a major sponsor of the six-time world champion Rattlers.

The Arizona Department of Gaming determined that the application by the Rattlers and RSI is eligible for one of the ten sports wagering licenses associated with an Arizona professional sports team or franchise and has granted RSI a temporary event wagering designee license. RSI plans to launch online sports betting in the state under its BetRivers brand during the upcoming NFL and NCAA fall football seasons.

“We are very excited to bring our BetRivers mobile apps to Arizona together with the Rattlers, which are deeply rooted in the Phoenix community and share RSI’s commitment to excellence,” said Richard Schwartz, Chief Executive Officer of RSI. “Arizonans are accustomed to receiving a championship caliber product on the field with the Rattlers, and we look forward to offering them a similarly high-quality product off the field through our award-winning BetRivers platform and top-notch customer service.”

“Arizona is home to the greatest fans in the country, and we are thrilled to help them enjoy online sports betting through our long-term partnership with RSI and the BetRivers team,” said Ron Shurts, Owner and Chief Executive Officer of the Arizona Rattlers. “Following our league-best regular season, this partnership continues the Rattlers’ tremendous success and momentum ahead of our round-one home playoff game this Sunday, where the BetRivers logo will be present.”

Arizona joins Connecticut, Louisiana, Mississippi and New Mexico as states where RSI has recently announced market access partnerships, with the latter two being subject to the passage of enabling mobile gaming legislation. Based on publicly available data, RSI is the market leader in the three most populous states that have legalized retail sports betting – Illinois, Pennsylvania and New York – and is a top five online sports betting company in the United States per gross gaming revenues over the past 12 months, according to a July 2021 report from industry market research firm, Eilers & Krejcik.

Mr. Schwartz concluded, “We thank the Rattlers as well as the Arizona Department of Gaming for their trust and partnership and look forward to working together to offer the people of Arizona entertaining, innovative and responsible gaming options.”