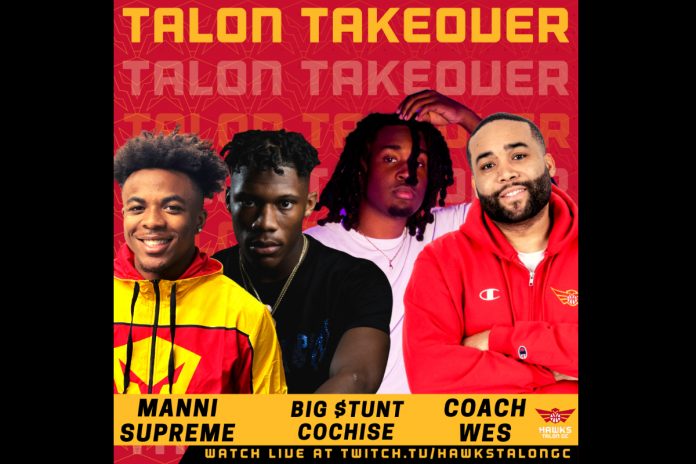 Hawks Talon GC, the official NBA 2K League affiliate of the Atlanta Hawks, hosted a livestream this afternoon on the team’s official Twitch channel as part of a content series called Talon Takeover. As part of the stream, Hawks Talon’s Team Manager and Head Coach Wesley Acuff was joined by both two rappers Cochise and Big $tunt. These artists, both signed to Columbia Records, have risen to popularity in large part due to their personal success on various digital media platforms such as TikTok and SoundCloud.

“It was pretty remarkable that we were able to bring two artists to this special edition of Talon Takeover,” said Acuff. “To have both Cochise and Big $tunt join us and play some NBA 2K brought a completely different dynamic to our stream, and we are grateful for all the fans who tuned in to watch the stream.”

During the stream, the conversation with both artists revolved around their background as well as their passion for music and video games.

Rather than run away from life’s trials, tribulations, and tough times, Big $tunt confronts them head-on in his music, and even uses them as fodder for inspiration. That tenacity can be credited for his rapid rise from the small rural town of York, SC to nearly 10 million streams, 109K-plus Tik Tok creates, and a deal with Block Entertainment/Columbia Records (all before his senior year of high school). He grew up with five siblings on his mother’s side and another five siblings on his father’s side as the middle child in both. In seventh grade, he teamed up with soon-to-be regular collaborator BiG J5 and cut his teeth on the mic. By high school, they “finally got into a real studio, because there isn’t one in York’. He featured on BiG J5’s “BrandNew Remix” and dropped “Thuggin” and “on gang.” In between, he excelled on the football field, playing cornerback and wide receiver for his school team. He transferred the hustle from the field back to the studio. It shows on his breakthrough single “Capitalize Off Pain.” On the track, a skittering beat and trap bounce echo beneath his singular and surgical high-register delivery. His voice slices right through the production as the hypnotic chant captivates. After racking up 1.5 million Soundcloud plays, it exploded on TikTok with countless fan videos. As he balances hip-hop, football, and school, his grind never lets up with more music on the horizon.

Getting his name from iconic cult classic The Warriors, Cochise is making a pathway for himself while generating an organic following. The Jamaican emcee newly signed to Columbia Records takes his talent to a bigger platform with a message in mind to “I want to make people know that they can be who they want to be.” In his arsenal of fiery visuals including breakout hit “Hatchback” (10.7M video views), “Knicks”, an owe to the legendry NY team, and his recent release “Usopp”, Cochise is standing 10 toes down in his authenticity to be uniquely himself. Using his Jamaican roots, The MC/producer draws from hip-hop and dancehall sounds and blends them with rich lyrics that reference anime, film, sports, and everything in between. Meanwhile, Cochise’s delivery is dynamic, with an array of flows and vocal styles that make for an unpredictable listening experience. As his continued success blossoms, Cochise’s noble mission, with a rapidly growing fan-base rooting for his deliverance.

HAWKS TALON GC INVITES MEDIA TO MEDIA AVAILABILITY AT ‘THE LAB PRESENTED BY DIGGI GAMES BY GEORGIA LOTTERY’ ON TUESDAY PRIOR TO THE NBA...