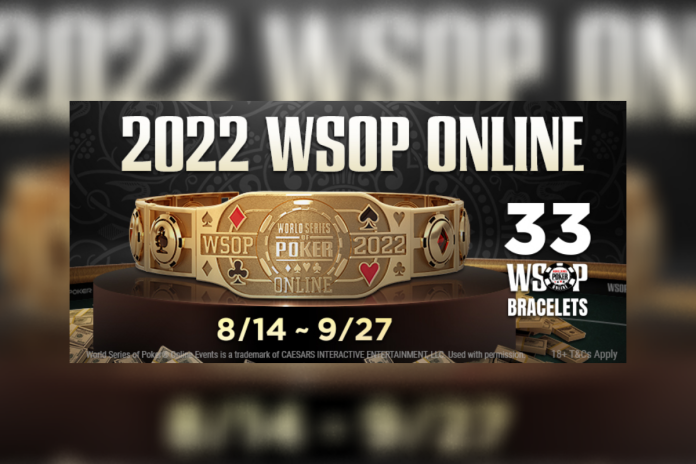 The World Series of Poker® (WSOP®) – the richest, most prestigious, and longest-running poker series – today announced WSOP Online 2022, a comprehensive online-only festival with offerings across both WSOP.COM in the United States and exclusive partner site GGPoker for all international territories. WSOP Online 2022 marks the third year of the online tournament series, which established several records in its first two years of existence.

Following the record-breaking success of the 53rd annual WSOP on the Las Vegas Strip, which awarded a whopping $347.9 million in prize money to a staggering 197,626 entrants, WSOP Online 2022 will feature official gold bracelet tournaments and wall-to-wall side action on both GGPoker (Aug. 14-Sept. 27) and WSOP.COM (Sept. 10-Oct. 18). Each bracelet winner from WSOP Online 2022, both international and domestic, will earn a seat at the Tournament of Champions during the 2023 WSOP in Las Vegas.

For the third time, GGPoker will play host to the $5,000 No-Limit Hold’em World Championship, known better to poker players and fans as the WSOP Online Main Event®. That event, which still holds the Guinness Book of World Records mark for prize pool in an online poker tournament, will again feature a staggering $20,000,000 prize pool guarantee.

“No one wanted to see this year’s WSOP come to an end,” said Senior Vice President and Executive Director of the World Series of Poker, Ty Stewart. “However, in many ways, the return of WSOP Online is even more exciting. Together with GGPoker, we have a clear vision to make this festival annually the biggest deal in online poker so that the WSOP offers players the marquee event in both live and online poker each year.”

GGPoker will offer 33 bracelet events with buy-ins ranging from $100 to $10,000. Highlights include the following tournaments:

Online satellites for all WSOP Online 2022 international bracelet events will run at GGPoker, allowing players to make their way into these events and take a shot at priceless WSOP gold for less.

WSOP Online on WSOP.COM, available to players physically located in Nevada or New Jersey, created prize pools of more than $25,000,000 in both 2020 and 2021, making it far and away the richest domestic online tournament series of all time. This year, the action is expanded to Michigan and Pennsylvania for the first time with six weekly bracelet tournaments each, for players geolocated within those state borders, in addition to the 33 bracelets that will be awarded on the Nevada and New Jersey shared liquidity network.

Buy-ins will range from $365 to $10,000 with WSOP.COM’s Online Championship set for $1,000 on Sunday, October 16. The online offering is scheduled adjacent to a series of notable live tournaments in Las Vegas this fall. Out-of-state players are invited and encouraged to participate in the series so long as their device is geolocated within state borders. Players are highly encouraged to test their account and geolocation services in advance of any tournament.

WSOP.COM highlights include the following tournaments:

Poker Initiative One More For One Drop Helps World Series of Poker Reach $25 Million Raised Since 2012 To Benefit One Drop Foundation’s Critical...