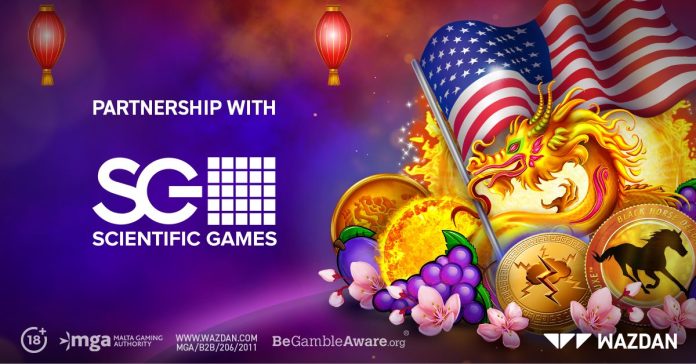 Scientific Games Corporation has bolstered its offering in key regulated states across the U.S. via its industry-leading OpenGaming™ platform after signing an exclusive aggregation agreement with multi-award winning studio Wazdan.

The two companies will work closely together to offer players high quality, mobile-first games in the states of New Jersey and West Virginia, starting in the first quarter of 2022.

Founded in 2010, Wazdan has grown rapidly in recent years, releasing over 140 games in 17 jurisdictions worldwide, including new and established European markets such as the UK, Malta, Sweden, Denmark, Lithuania, Spain, Italy and Greece.

Wazdan’s focus on the North American market will intensify in the coming months, with the Malta-based studio currently in the process of finalising supplier licences in Michigan and Pennsylvania.

OpenGaming customers will have access to popular games such as Sizzling 777 Deluxe, Power of Gods™: the Pantheon, Black Horse™ Deluxe, and Relic Hunters and the Book of Faith™, as well as new Hold the Jackpot hits, such as Sun of Fortune and Burning Stars 3™, with more to follow over the coming months.

This latest addition to the ever-growing Scientific Games ecosystem further demonstrates the appeal of the OpenGaming™ platform to operators and lotteries in key regulated markets across the U.S. and the rest of the world.

Steve Mayes, Partnership Director at SG Digital said: “This exclusive aggregation partnership further strengthens the wide range of games we can offer players in key regulated states across the U.S. through our OpenGaming platform, which incorporate responsible gaming tools.

“Everyone within the industry knows how talented the team at Wazdan are and what they bring to the table. We thoroughly believe players across the U.S. will enjoy their fantastic portfolio of slots just as much as everyone else across the world does. Finally, I’d like to thank Bekki D’Agata at Wazdan for her assistance in getting this major deal over the line.”

Michal Imiolek, Chief Operating Officer at Wazdan NJ LLC said: “Scientific Games is a company that needs no introduction, being one of the leading players in the industry. We’re delighted to partner with them in this exclusive agreement.

“Our progress in the United States has been our greatest success this year. We can’t wait to work closely with Scientific Games going forward and expand our footprint in the US, providing players with immersive experiences.”