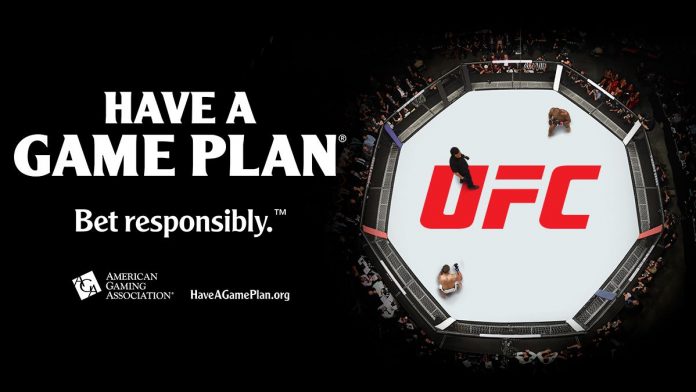 To highlight its support for the campaign, UFC will use its own in-venue, digital and broadcast assets to promote co-branded marketing materials with UFC themes to encourage responsible sports betting.

“We have the most passionate, die-hard fans of any sport and they love to bet on UFC, but it’s important they do it responsibly,” said UFC President Dana White. “We’re proud to work with the AGA and get behind this campaign to encourage our fans to make smart decisions and promote responsible gaming.”

UFC joins NASCAR, the National Hockey League (NHL) and the PGA TOUR as a league partner in the campaign, which focuses on the core principles of responsible sports betting: setting a budget and sticking to it, keeping betting social, knowing the odds and playing with trusted, regulated operators.

“As sports betting expands nationwide, professional sports leagues recognize the need to educate fans and ensure they’re wagering safely,” said AGA President and CEO Bill Miller. “We’re thankful to see this campaign grow as progressive leagues like UFC lend their considerable voice to this important effort. UFC’s commitment is important to engage, educate and encourage their fans – some of whom may be placing bets for the first time – to wager responsibly.”

The AGA launched the Have A Game Plan campaign in 2019 to educate sports fans on the importance of responsible sports betting. In addition to leagues, UFC also joins Monumental Sports and Entertainment, the Vegas Golden Knights and FanDuel as official campaign partners.